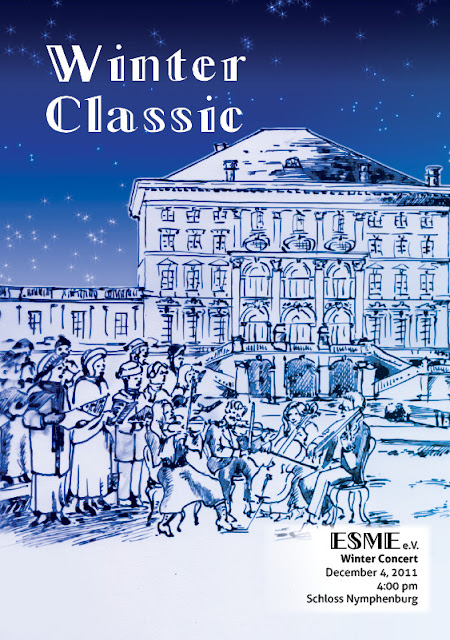 One of my recent illustration projects was this cover illustration and program layout design for ESME e.V.  Their winter concert took place last weekend, and I was lucky enough to do their cover design as well as the inner layout of the concert program.   I was happy to do an architectural illustration after not having done one in a long time.  First I photographed the location... and trudged through the mud with my dog in order to get the right angle for the illustration.  Luckily, all the water in front of the Schloss Nymphenburg is all evaporated and all that's left is a semi-desiccated mud field.  It was fun to walk through, although my dog thought otherwise and I ended up carrying him along with my camera equipment through part of it.

Quite an adventure was had by both in order to get the right shot.  Then the illustration itself was done with fountain pen and ink.  The background gradient was added later in Photoshop as well as the blue tones and text which were added in InDesign.  Overall it was a quick and fun holiday illustration!

Congratulations to the musicians and singers who participated in the Winter Classic concert.  Thank you for letting me be a part of it!