Thanks for the yarn, Ma!

My Christmas present from my mom this year included this beautiful 50/50 silk/merino blend from Malabrigo in Raspberry.  I knew I wanted a scarf and I knew I wanted something ruffly.  The perfect pattern combination was found in Laura Chau's Cosmicpluto Knits: "Just Enough Ruffles".

Here's my adaptation... I used a thinner yarn, worked less amount of wrapped stitches, and an alternative bind-off.  It's real pretty, I think. 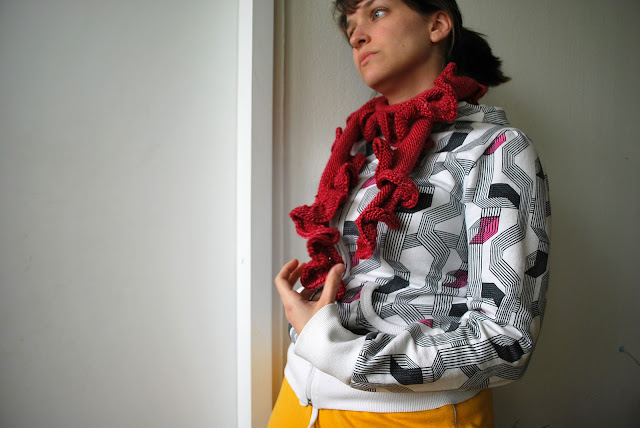 I began knitting Little Birds about two months ago, and I learned a lot about garment construction whilst knitting it.  The pattern uses a steek down the center/diagonal opening to allow for continuous knitting on circulars despite the eventual need to separate the piece eventually.  The pattern does have it's blips.  For example, Twist Collective editors must have had a mix-up because schematics give the final sleeve length as ~19" which is a full-sleeve length, but the charts contained within the pattern are actually for a 16" sleeve (3/4 length sleeve).

Wanting a full-length sleeved cardigan, I opted to add an additional row, which I was happy to do in the form of some very hungry space invaders.  I also added quite a bit of length to the ribbed cuffs in order to compensate for the still too-short-arms.  I love the ribbing and everyone loves the beaded ribbing effect.  In fact, I've had more compliments on that than my hungry space invaders and exploding birds.  Go figure.  :)

Other mods to the pattern: the bird's head is actually smaller than the charted one, I made the back less wide at the arms, and I sewed the buttons on, but then also sewed the overlapping fabrics together as they were tugging in a funny way.  I also chose to do a ribbed collar instead of a garter stitch one as specified in the pattern.  I'm happy to be done and loving it enough to have worn it three days in a row.
No comments:

Email ThisBlogThis!Share to TwitterShare to FacebookShare to Pinterest
Labels: knit

Some really lovely yarn finally arrived after... nearly a month!  I think the Icelandic volcano in conjunction with the customs here in Germany probably added to the length of the journey.  But it's here now, and I have plans for it... It's smooshy and has a really vivid green hue to it.  It reminds me of newly sprouted leaves... my favorite green.

Email ThisBlogThis!Share to TwitterShare to FacebookShare to Pinterest
Labels: yarn

Help me figure out which buttons to use. These are all from my vintage button collection (aka my button jar) which means some of them are limited in number... but that's okay. Let me know what you think! Which looks best on my funky Little Birds?