Once you've had your design proposal accepted, what's the next step?  The sponsored yarn for this project came in hanks, so my first step was to wind one hank of each color yarn into center-pull balls.

Then, I began the gauge-swatch process because the gauge of this yarn was different from that of my proposal.  I knew the project would entail some ribbing, plain stockinette, and also fair-isle.   So, I made swatches of all three areas to make sure my math worked out for the end-knitter.  I also used the first swatch in fair-isle to see if I liked the planned progression of color in the final yarn.


Once I had a good idea of the pattern numbers based on the swatches, I wrote a rough draft of the pattern including the various sizes.  I went through the early drafts of the pattern and then knit the sample based on this draft. So, even after the sample was done, there were some changes that needed to be made.  Although it's not ideal, some things you just don't see until after you've knitted it and see the garment as a whole!  The pattern was then test-knitted by a team of test-knitters who followed the edited second draft.

After assessing all the data gathered from the testers, I updated stitch counts, faulty charts, and edited any unclear text.  Then, I packaged schematics, charts, the written text, and the sample.  The sample was shipped off and the draft e-mailed to the publishers (the Twist Collective team).

Several weeks later, when the editing team was ready to work on the Fall issue, I received an e-mail notifying me of their progress.  After that, we went back and forth reviewing and editing a pre-press formatted version of the pattern.  Both sides are responsible for checking numbers, schematic accuracy, language, grammar, knitting terminology and conventions, etc.

Then a few weeks after that, the photos were processed and edited, and finally the pattern was published!

Inspiration comes from many different sources.  Sometimes, I am inspired by something I see on the street, in a movie, on a magazine cover on the newsstands, or even at the museum within a painting or sculpture.  Inspiration can also come from practicality - Me: "Gosh, I really would love a cardigan in xyz color to go with that great top..."  Often, I am inspired by the mood boards sent out by magazines and publications; which was the case for Academia, a sweater vest I designed for Twist Collective.

For this project, I was inspired specifically by text on one of the mood boards for Twist Collective's Fall 2011 collection.  One of the themes mentioned "bookworm" and immediately I thought of sweater vests.  But, what of them?  What kind of sweater vest?  A ribbed one or cabled one?  I think those are pretty standard.  But, what about something a bit more adventurous to knit?  At this point, I have to mention that I had already been working on designing some fair-isle mittens so fair-isle was on my mind.  I spent over a week researching and reading about the Fair Isles and the history of the stranded color-work we have come to call fair-isle.  So, what popped into my mind was this image of the Duke of Windsor wearing a fair-isle sweater with a dog in his arms.  Yes, this was it.  A fair-isle vest it would be.

What would the color-work pattern be?  Would it be lots of X's & O's like on the Prince's jumper?  An all-over fair-isle design?  I thought the color scheme in the painting was a bit muted for my taste.  I studied the pattern and color choices carefully, but muted colors aren't really my style nor did the pattern itself really appeal to my aesthetics.

With those considerations in mind, I combined a series of fair-isle patterns including an argyle segment to create a motif that would be the eye-catcher of the garment.  I sketched out the idea, plotted the pattern on a grid with OpenSourceCalc, and then added an illustrated schematic with garment measurements.  I then knitted two swatches with yarn I had in my stash.  I scanned the swatches, bundled my sketches and illustrations together as a PDF document, and sent it off to the editors of Twist Collective...  and then waited.


The quilt in the photo began as a gift for my niece... in 2009.  I began this, my first quilt ever, with a really complicated block (a 9 square center, sashes, squares, etc.) and lost the size notes somewhere in the in-between.  Now that I have a sewing machine in working order, and have brushed up my sewing skills with a few books and Craftsy tutorials, I took an afternoon and finished the quilt... I ended up kind of redesigning it for my niece's upcoming little brother. Tee hee. So, it's sort of a strange first quilt, but I'm proud of it.  My next step is to quilt the three layers together using a darning needle foot and my home sewing machine.  I'm waiting for it in the mail.


The second project photographed is a dress in progress.  It is Simplicity pattern New Look 6557 View B.  The fabric was an IKEA summer special for 5EUR/meter.  A major bargain here in Deutschland. I'm nearly finished with it.  All I'm missing is the zipper installation, some top stitching, hem, and I think I may add some flower appliques... we'll see.  I think I need to break up that big patch of blue at the center!  Oh postal service, when will my zipper and sewing foot arrive?!
No comments: 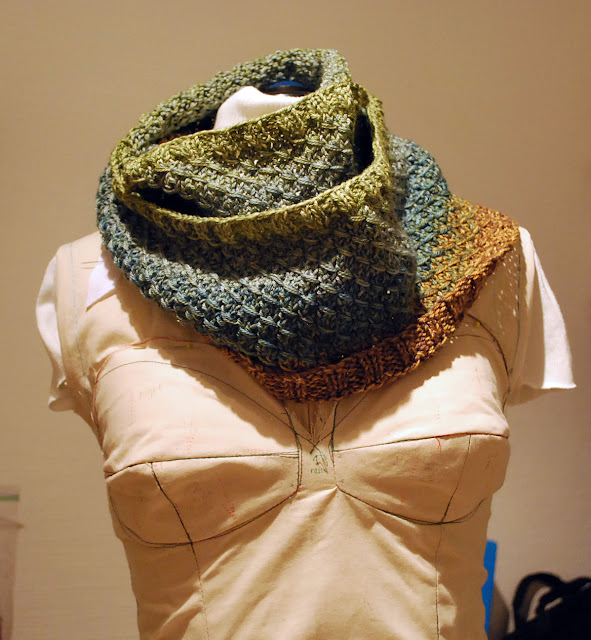 After winning one of Juniper Moon Farms (fiberfarm.com) Friday Giveaways, I knit up the pattern with some adjustments.  It is currently draped over my newly covered dress form which is modeling a current sewing project.  That's the second version of the muslin bodice for the Bombshell Dress Sew-Along hosted by Craftsy.  The dress form is slightly larger than me, so it's wrinkling, but it's fine on me.  I'm almost to cutting the real fabric except I haven't figured out what to use!!
No comments:

In an earlier post, I posted a sneak preview of this sweater vest.  The yarn used was Classic Elite Yarns Fresco, and it's an amazingly soft yarn.  Check out this new pattern in Twist Collective's Fall 2011 issue here or at their shop here.

It was such a surprise to see the vest accompanied by a banjo!  Love it!

More posts to follow about the design process for this vest...