I always knew the three-quarter view was the most flattering!  Hah!

This was my first knit top of the year, and I think of it as a "lukewarm" project.  The cut of the pattern is not too friendly for those with poochy bottom-belly pouches like myself.  It makes the wearer look a bit "full" in the belly with just the slightest exhalation.  I'm still going to wear it, but possibly with shapewear underneath. It's not my favorite top, but I'll be wearing it anyway because I love the fabric.

And somehow I managed to mistakenly align the stripes along the sleeve and create a mobius!  That made for a heck of a time when I was doing the twin-needle top-stitching.  I had a big laugh when I realized what happened.  I could've sewn a spiral up the sleeve! HAH!
My biggest frustration with Very Easy Vogue's V9056, though, is the sizing.  Its sizing is so off!  I even checked with the finished measurements, and made the size 12 with 14 sleeves.  I made an adjustment to the torso and lengthened it to make sure waistline really hit where it said.  I've never had to do that.  I'm short-waisted usually.  After trying it on, I was swimming in it!  I had to take it to the serger and lop off 3/4" on each side seam.  Yes, 1 1/2" total of fabric removed which in woven fabric patterns is ridiculous, but in a knit it's upsetting.  Negative ease, people! Cutting off the fabric, in turn, affected the drape of the peplum, but I can deal with that.  Just argh. 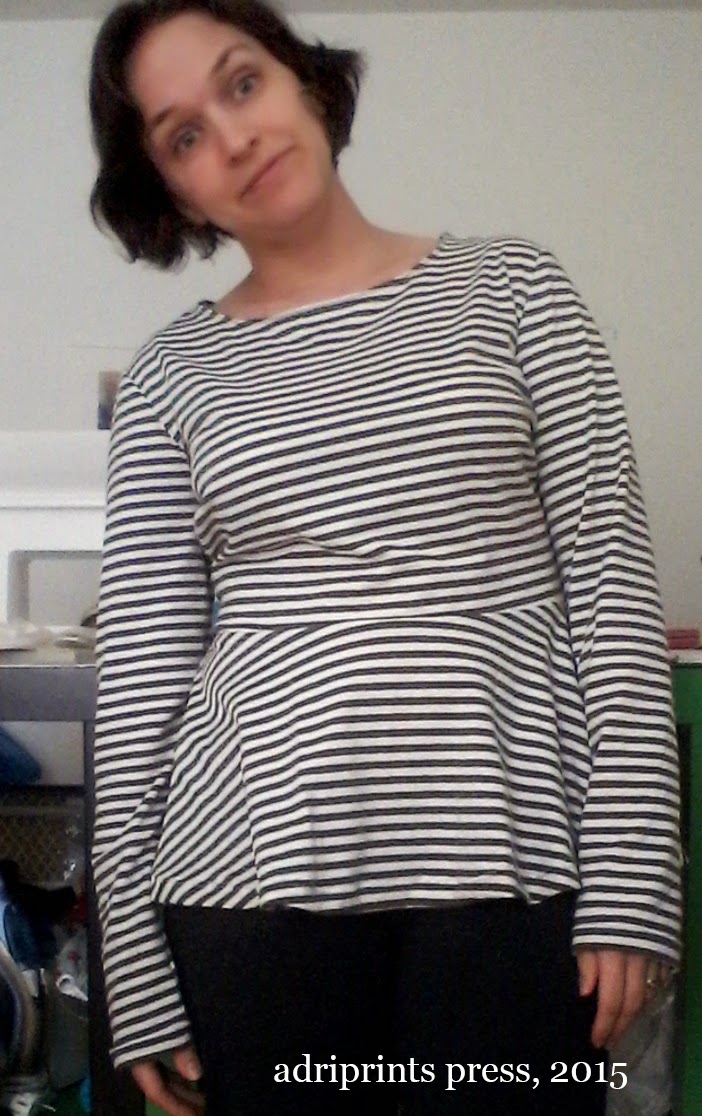 And the pattern illustration looked so promising, too!  One of my friends made it, and she looks awesome in it!  I asked her about the fitting, and she admitted to ignoring the measurements and just making the smallest size regardless.  So much for following instructions!  Hah! 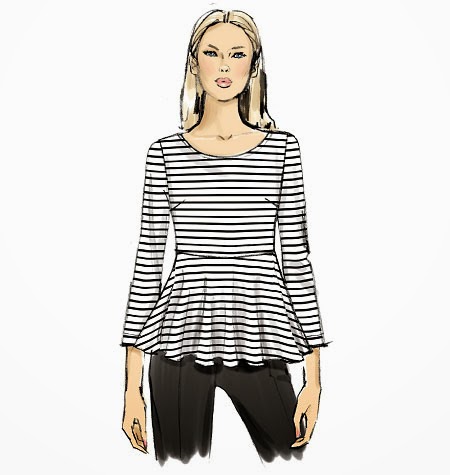 Well, it's a non-maternity, non-nursing top and I need those so I'll keep making them!  Next on my list is Colette Pattern's Moneta.  We'll see how that one goes.  They're a bit more conscientious about modern fit, so hopefully I won't have to make too many changes to the pattern.

UPDATE
March 19: I made a rookie mistake.  I forgot to wash the fabric before sewing, but in this case it's worked in the favor of this piece and it fits really well now!

Hey Adri, I think I remember you talking about maternity tops ... This looks kinda cool with the long sleeves.

Yeah, this one would work as maternity too without any of the modifications. I still wear it now, though.